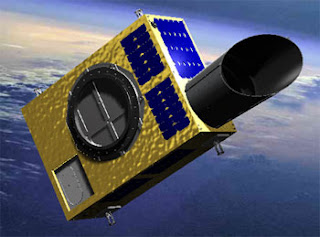 With over 50 wheel-years on-orbit MSCI's line of reaction wheels is quickly becoming the reaction wheel of choice for microsatellites world-wide -- and for good reason!  With their low power, low mass and minimal vibrational disturbance, MSCI MicroWheels are perfect for a small satellite with demanding pointing and power requirements. 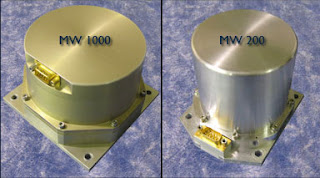 For more information about MSCI's line of precision reaction wheels for microsatellites, check out MSCI's website.

Keep up the great work guys!!
Posted by microsatguy at 11:15 AM No comments:

PSLV Roars to Life with a Canadian Microsatellite on Board

Today, an Indian PSLV (Polar Satellite Launch Vehicle) lifted off from the Satish Dhawan Space Centre with a large Earth observation satellite (Cartosat 2B) and a Canadian microsatellite on board! 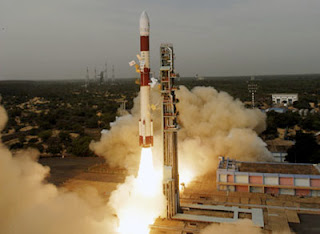 The Canadian microsatellite was the AISSat 1 from the University of Toronto Institute for Aerospace Studies Spaceflight Laboratory (UTIAS - SFL).  Way to go SFL!  Of note, there were also two other student satellites from India and Switzerland that launched along with Cartosat and AISSat 1.


The successful launch of the PSLV today bodes well for MSCI's upcoming launch of the NEOSSat spacecraft.  NEOSSat will also use the PSLV launcher for its launch in 2011.

Posted by microsatguy at 11:41 AM No comments:

I remember a day, not so long ago, when aerospace standards (such as soldering, cabling, materials, etc.) were all available free of charge (or for a minimal printing fee).  Now, it seems as if almost all standards, be them IEEE, IEST, ISO or whatever, can only be purchases for upwards of $100.  Companies like IEST seem to be popping up all over the place, putting price tags on the latest versions of standards that aerospace companies require to do their jobs properly.

For large space companies that produce many, many large satellites in the 10's or 100's of millions of dollars, a few standards every few months at a few hundred dollars per standard is not likely to be much of an issue.  However, for the microspace sector, margins are generally pretty low and so we need to choose carefully where we put our money.  This is further complicated by the fact that with microsatellites becoming more and more prevalent in the space industry, stakeholders are putting increasing demands on the performance of microsatellites, which further strengthens the need for standards!

I understand people wanting to make money in the business of standards production.  Let's face it -- everybody is out to make a buck or two on something.  However, I have to question the ethics behind charging almost $200 for an industry-wide standard on contamination control (which used to be freely available as MIL-STD-1246C).  Yes, you can still download the older versions of the standards from sites like EverySpec, but they are just that -- old versions.

So, what ends up happening?  Usually one of two things.  Either engineers simply use the older versions and hope that nothing has changed, or they don't cite the use of any standard, defeating the entire purpose of standards in the first place.  Yes, you could argue that it's the cost of doing business in the space sector, but standards should not exist for the the sole use of companies that can afford to constantly purchase the latest and greatest versions of every relevant spec out there.  It doesn't seem right to me.

I think the situation gets even more serious with residential building / electrical codes.  At over $100 per copy, I'm certain that most "do-it-yourselfers" decide to forgo the expensive code and just "wing-it".  Is this what we want?  One has to wonder, is this a means of forcing would-be "do-it-yourselfers" to hire qualified electricians for relatively mundane tasks like installing a light switch or moving an outlet.  I'm not a conspiracy theorist or anything, it just makes you go "hmmm".

I suppose there is also the question of who would be willing to put these standards together for "free".  Good question.  Space agencies around the world?  International organizations?  Again, I'm not sure.  It's quite a conundrum.

But one thing is for sure:  If more and more people don't use "standards" for whatever the reason, they are not "standard".
Posted by microsatguy at 9:19 AM No comments: I've often found it to be unfortunate that sometimes it's far too easy to forget about the many successes in the space industry in favour of the few failures.  Sure, people invest a lot of money into space, and for good reason.  But let's not let a few mistakes artificially impede our progress.  Mistakes will happen, we will learn, and the space industry will continue to move forward.
Posted by microsatguy at 3:08 PM No comments:

My oh my, how time flies when Canadians have fun with Microsatellites!

Yes, it was seven (yup, 7) years ago today (June 30, 2003) that MSCI (formerly Dynacon) made history by completing and launching "Canada's Humble Space Telescope" known as MOST (Microvariability & Oscillations of Stars) on a Russian Rockot launcher: 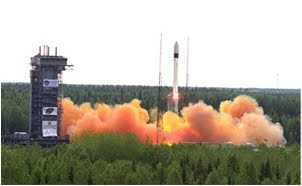 By the way, if you were thinking that 7 years is a long time, you would be right!  MOST's design life requirement was only 1 year (with a goal of 2 years).  The fact that MOST is as strong today as it has ever been is a testament to the true viability of microsatellites, especially in the Canadian market.  The flight history that MOST has accrued over the past 7 years on the various MMMB components is proving to be invaluable to future missions using the MSCI MMMB (like NEOSSat, for example).

Even outside of the space context, 7 years is a tremendous amount of time.  Just think of all the things that can happen in 7 years:


Seven years is a very long time and so today, we celebrate MOST.  And, since it is strawberry season in Ontario, why not with a strawberry cake? 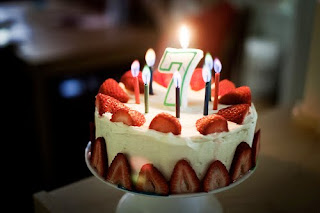 HAPPY BIRTHDAY MOST!
Posted by microsatguy at 9:18 AM No comments:

The Little Spacecraft That Could

They did it!!!
Over the weekend, JAXA's Hayabusa spacecraft successfully returned to Earth, landing in the Australian outback, after a long and harrowing trip to an asteroid.  Hopefully, the capsule will contain particles from asteroid Itokawa it briefly touched down on in September, 2005.  Here is a photo of the capsule streaking across the night sky: 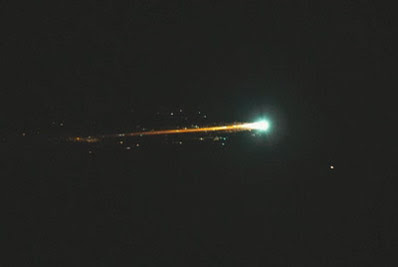 While nobody would ever classify Hayabusa as a microsatellite, or even a small satellite (however, the $100M price tag for the mission is not as large as many JPL missions), I think the success of this mission speaks volumes to the ingenuity of the JAXA satellite engineers (from Japan) to troubleshoot problems and find creative ways around them.  On several occasions throughout its 7-year mission, the Hayabusa team faced what many felt was a certain demise of the spacecraft and the asteroid sample-return mission -- not the least of which involved a major fuel leak.

With satellite missions getting more and more ambitious, it's only natural that microsatellite missions will follow suit.  We might even see microsatellites leave Earth's orbit in the coming years.  Who knows!  If and when small satellites start thinking "outside the orbit", it will be problem solving like this (exhibited by the JAXA engineers) that makes it possible.

So, to the Japanese Hayabusa engineers, hats off to you!

Posted by microsatguy at 8:51 AM No comments:

Well, I guess this is it - my first blog post.  It was only a matter of time.  My wife, Ally Ferguson of I Heart That Dance (and recently of MSCI too) has been insisting for years that blogging is NOT THAT HARD.  I believe there was something said at some point along the lines of, "Phil, for Pete's Sake!  It's not ROCKET SCIENCE!".  I feel like that joke is a little over-used on us *actual* rocket scientists out there.  But, I must admit, this is considerably easier than I thought (and for the record ... MUCH easier than rocket science).

For the past ten or so years, I have been following various space blogs like NASAWatch, SpaceflightNow and Spaceref Canada.  There are usually lots of interesting articles on these daily blogs, but not always relevant to small space in Canada.  Don't get me wrong -- I like to hear the latest news on astronauts trying to settle scores with ex-lovers just as much as the next guy, but is it really relevant to how the Canadian microsatellite business is doing these days?  I think not.

So, enter "Microspace in Canada - The Blog".  Here, I hope to maintain a collection of commentaries, links to news items, press releases and just general interest surrounding the small space industry in Canada.  At MSCI, I am fortunate enough to get exposed to many small space projects, technologies and initiatives.  Being a rather opinionated guy, I usually have something to say about them.  So, rather than just spouting off at my wife, kids and whoever else happens to be nearby at the time, I decided to let the internet know.

Enjoy!
Posted by microsatguy at 8:59 AM No comments: